Pepsi, Kendall, and how to overcome Organisational Groupthink

HomePepsi, Kendall, and how to overcome Organisational Groupthink 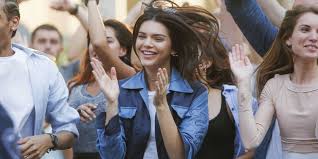 Oscar Wilde said that the only thing worse than being talked about, was not being talked about. That may be true, but there are still some red faces at Pepsi this week following their decision to pull their multimillion dollar, high profile advertisement featuring Kendall Jenner offering a refreshing beverage to a Policeman to the delight and rapturous applause of hundreds of protesters.

This post isn’t about how Pepsi made a cheesy ad (they did) or how the tone of the ad was totally wrong (it was) or how having a Kardashian/ Jenner fronting it makes it even worse (it does). Rather, it is more about the power of Groupthink- and how the speed, power, and efficiency of the collective consensus opinion forced Pepsi to make the critical decision to pull the ad almost immediately.

Groupthink describes the influence and emphasis of consensus. It is the idea that people will support an opinion or a decision to create harmony, conformity and maintain the status quo, sometimes to the detriment of critical or objective thinking or at the expense of their own differing opinion. In the Pepsi example, there is no question that there were many people whose offence and derision to the ad only manifested itself once it became clear that the prevailing opinion was one of offence and derision. It would be hugely unpopular to now lament the fact that the ad was pulled because you enjoyed it or thought it was a great message. So, what happens in that scenario is that only one opinion is heard, rather than a balanced debate about Pepsi and the strengths and weaknesses of their ad campaign. Disclaimer: Other carbonated soft drinks are available.

In the organisational context, Groupthink is a common phenomenon and can be seen as a convenient collective opinion enabling organisations to make decisions quickly and effectively. But the explicit or implicit lack of debate can be unhealthy and there can be many drawbacks to discouraging discussions that challenge the status quo. In fact, it is quite possible that it was internal groupthink within the Pepsi boardroom that got this ad to market in the first place. An organisation’s inability to ask the challenging questions can result in costly mistakes that impact the bottom line and the motivation and morale of those people who felt that their voice wasn’t heard.

So, what can Companies do to avoid groupthink? It is not always easy and it takes strong leaders to welcome and foster alternative opinions. But it can be done.
1.Foster a culture of open communication. Encourage people to raise concerns, discuss ideas and respectfully challenge opinion at all levels of the organisation.
2.Be aware of ‘yes’ people. Those people who tell you what you want to hear may appear supportive no matter what, but their motives aren’t always in the best interest of the company.
3.Likewise, be aware of ‘likeminded’ people. The bravest leaders I know, actively surround themselves with people who are different to them to ensure a diverse set of opinions and mindsets.
4.Listen honestly to different opinions. Companies that ignore different opinions is bad enough, but very often they shoot the messenger too, thus further discouraging dissenting voices.
5.Think objectively about your customer. What would they think? And ultimately what do they want? It is much easier to overcome groupthink early on in a decision making process,than deal with the repercussions after the event. Just ask Pepsi.